Palmeiras are going up against visiting club Atlético Goianiense at Allianz Parque in the Serie A meeting on Thursday.

Palmeiras
Palmeiras will be hoping for a repeat of their last result, following the 0-2 Serie A victory over Coritiba. A common characteristic of more recent Palmeiras games is the number of results with a nil in them. Taking their prior 6 matches leading up to this one, in 5 of them a bet on "Both Teams to Score" would've lost. Nonetheless, we must now wait to see if such a trend might be maintained in this upcoming game. 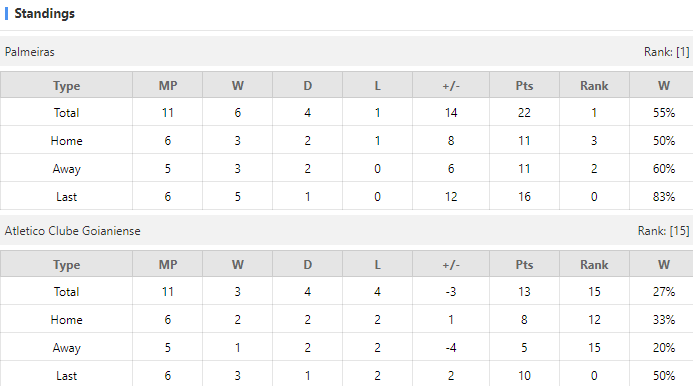 Atletico Clube Goianiense
Atlético Goianiense will come into the clash after a 0-2 Serie A win with the defeat of Fluminense in their most recent match. A sequence of accomplished showings from the Atlético Goianiense defence has resulted in their ‘goals against’ tally standing at 4 from their past 6 clashes combined. Over that same time, the number of goals that they have scored themselves amounts to 8.

Verdict:
Palmeiras have a huge advantage in terms of form and strength. The 1X2 first odds is 1.40-4.50-8.50, which means support the home team. Palmeiras should win this game.

Football Brazil Serie A Atletico Clube Goianiense Palmeiras
(Disclaimer：Any views or opinions presented are solely those of the author and do not necessarily represent those of NowGoal. We disclaim any responsibility and accepts no liability for any direct or indirect loss or damage arising from any inaccuracies.)

Steph.C 270 Article
My name is Steph, I love football games and betting. Outside of the top five leagues, I also have attention to the others because they are more profitable and more exciting.
See More Article