Sporting Braga
Braga, who won their previous game, will hope for a similar result following a 1-2 Primeira Liga victory vs Sporting Lisbon. In their preceding six games, Carlos Carvalhals Braga have seen rewards for their attempts on goal a total of 11 times, an average number of goals scored per match of 1.83. 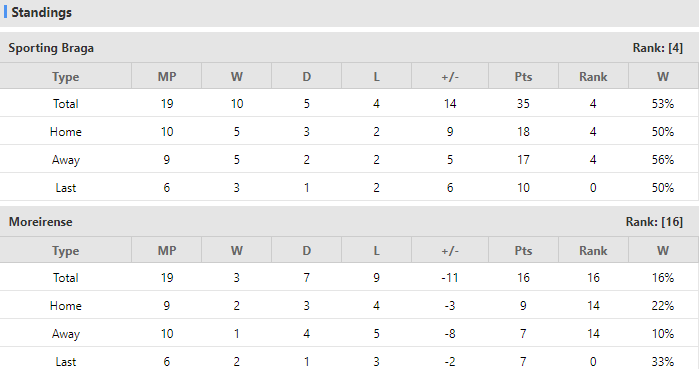 Moreirense
Following on from suffering a loss in their previous game against Santa Clara in Primeira Liga competition, Moreirense will be hoping to turn things around here. Over the course of 5 of the previous 6 clashes involving Moreirense, a comparatively low number of goals have been hit between them and their opponents. The overall average number of goals per game during that period comes out as a paltry 1.67, with the average goals for Os verdes e brancos standing at 0.67. We shall soon see whether or not that trend will be sustained into this next match.

Football Portugal Primeira Liga Moreirense Sporting Braga
(Disclaimer：Any views or opinions presented are solely those of the author and do not necessarily represent those of NowGoal. We disclaim any responsibility and accepts no liability for any direct or indirect loss or damage arising from any inaccuracies.)