On Saturday, 41 years after their first meeting in the lovely city of Paris, Liverpool and Real Madrid will meet in Saint-Denis, just north of the French capital, for the 2021-22 Champions League final.

Liverpool
This weekend, the Reds will be aiming for their seventh title in Europe's top league. On their way to the Stade de France, Klopp's squad has sent Inter Milan, Benfica, and Villarreal packing. Since that setback to the Nerazzurri on March 8, the team has overseen an 18-game undefeated run in all events, with 10 wins in their past 11. The European Cup/Champions League final on Saturday will be Liverpool's 10th appearance. Some of the players are out for vengeance, none more so than Salah. 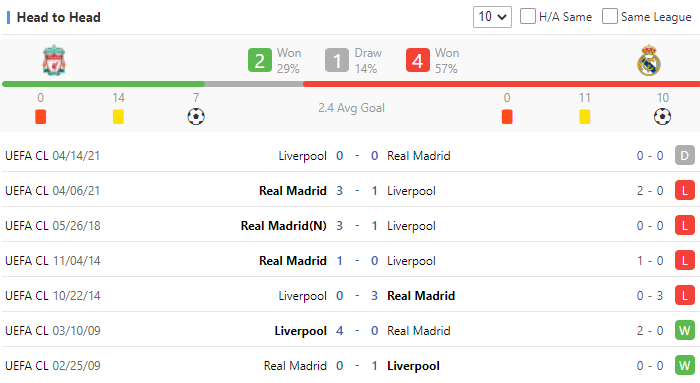 Real Madrid
Los Blancos are attempting to win the trophy for the record-breaking 14th time. Chelsea, PSG, and Manchester City have all been eliminated by Carlo Ancelotti's side. The team has made an unlikely return in this season's competition thanks to lethal striker Benzema and winger Vinicius. After clinching the title with weeks to spare, it's understandable that they'd take their foot off in La Liga. Los Blanheir’s European credentials are undeniable, especially after winning each of their previous seven European Cup/Champions League finals.

Prediction
What a difficult game to predict. Keeping the likes of Benzema, Vinicius, Salah, and Mane at bay for 90 or 120 minutes is nearly impossible, and the Reds' attackers, in particular, should be confident of scoring a few goals against a fragile Blancos defense. Liverpool might be brought to penalty kicks once more, and we feel that Liverpool's previous experience from 12 yards will enable them win Europe's richest award for the seventh time and put an end to the Real fairytale.

Liverpool to win on penalties

Football UEFA Champions League Real Madrid Liverpool
(Disclaimer：Any views or opinions presented are solely those of the author and do not necessarily represent those of NowGoal. We disclaim any responsibility and accepts no liability for any direct or indirect loss or damage arising from any inaccuracies.)