Libertad will host The Strongest on the group stage of Copa Libertadores. Libertad leads the group table with seven points, while The Strongest are third with six points.

Libertad
Libertad will be hoping it bounces their way, after two straight defeats in this competition. They have also failed to score in those two matches and going into this game, only one of their last five matches in the group has produced over 2.5 goals. They drew 1-1 with The Strongest in their first game in the Copa Libertadores this season. 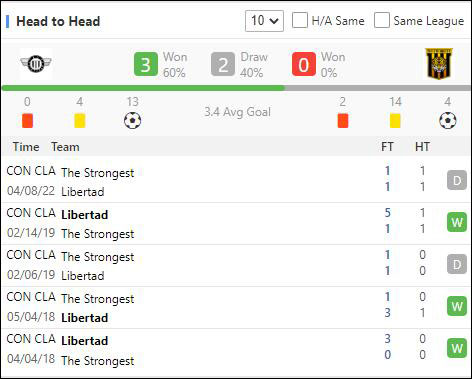 The Strongest
The Strongest haven’t really done well in their recent matches; they come into this one with one win in five games. However, they’ve been good defensively, keeping three clean sheets in their last five matches and this is a quality they’ll want to carry into this game as they improve on a run of three games in five without scoring. In the Copa Libertadores, they haven’t lost in the last three matches, but they have one win only in five. Four of The Strongest’s last five matches in this competition have ended in under 2.5 goals, and they’ve scored more than a goal in just one of the five. Their away record in this competition is really bad; in the last 17 matches, they have no win and in the last eight, they’ve failed to score. The Strongest have managed just one goal in 10 away matches in Copa Libertadores.

Prediction:
Most of both team’s recent games were under 2.5 goals, so I think this may be a closed game with low-scoring.

Football Copa Libertadores The Strongest Libertad
(Disclaimer：Any views or opinions presented are solely those of the author and do not necessarily represent those of NowGoal. We disclaim any responsibility and accepts no liability for any direct or indirect loss or damage arising from any inaccuracies.)