Libertad and The Strongest will face off in the last round of Copa Libertadores group matches on Thursday, with everything to play for in the race to qualify for the knockout stage.

Libertad
Libertad's plight in Group B was made worse with back-to-back losses to Caracas and Athletico Paranaense. They are still in first place owing to a strong start to the season, in which they scored seven out of a possible nine points in the first three games. Libertad are the clear favorites going into this match. They have won seven of their past nine contests. 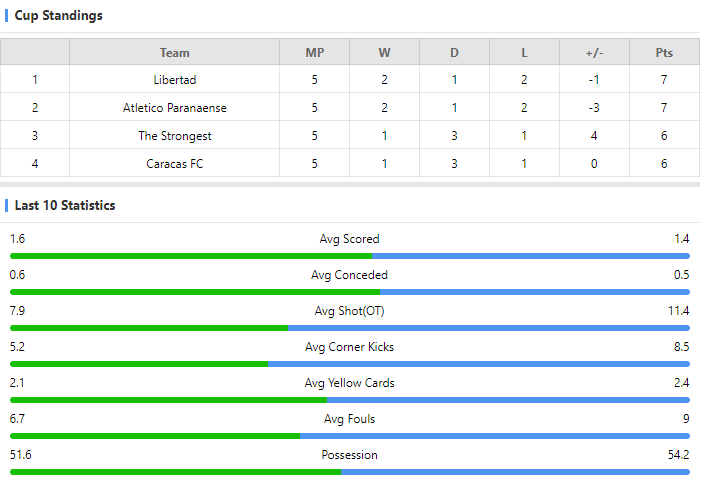 The Strongest
The Strongest leads the domestic league with 14 wins in 17 games since the season began. They also have an outstanding campaign that began in the Copa Libertadores second qualifying round - lost only one of their five group games. The Bolivians haven't conceded a goal in their past two domestic league games, as well as their last two Copa Libertadores matches.

Prediction
The Strongest's hammering of Athletico Paranaense earlier in the group round gives us hope that they may pull off another upset, but we predict they'll come up just short. Libertad has a good squad and will be optimistic of progressing, especially because they have home advantage.

Football Copa Libertadores The Strongest Libertad
(Disclaimer：Any views or opinions presented are solely those of the author and do not necessarily represent those of NowGoal. We disclaim any responsibility and accepts no liability for any direct or indirect loss or damage arising from any inaccuracies.)