Athletico Paranaense will host Caracas in the final round of group matches in the Copa Libertadores. Both two sides are separated by 1 point in Group B. Athletico Paranaense is in the second place with seven points while Caracas are bottom on six points.

Atletico Paranaense
Athletico Paranaense headed into this game with four wins in the last five matches. They have just one loss in that run and in three of their last four matches, they have scored two or more goals, with three of the five matches producing over 2.5 goals. Three times in the last five matches, they’ve kept clean sheets and will approach this game confidently having beaten Liberatd 2-0 in their last Copa Libertadores game. 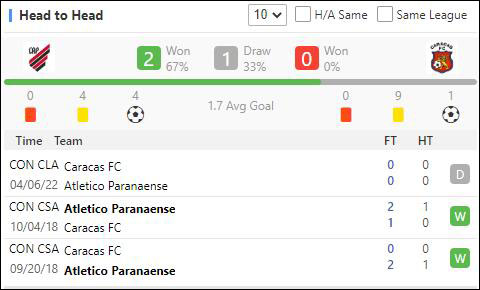 Prediction:
Athletico Paranaense are on a good run, winning four of their last five matches and we will support them to win this clash.

Football Copa Libertadores Caracas FC Atletico Paranaense
(Disclaimer：Any views or opinions presented are solely those of the author and do not necessarily represent those of NowGoal. We disclaim any responsibility and accepts no liability for any direct or indirect loss or damage arising from any inaccuracies.)