Brentford’s final home game for this season is coming this weekend. Will Leeds take points at Brentford Community Stadium？

Brentford
They are the best one among the newly-promoted this season. They have ranked top four at the table of the League once. Now they are eleventh in the League table because they are in a poor condition when playing in many fronts. As they have achieved their objective of safety, they are unambitious. 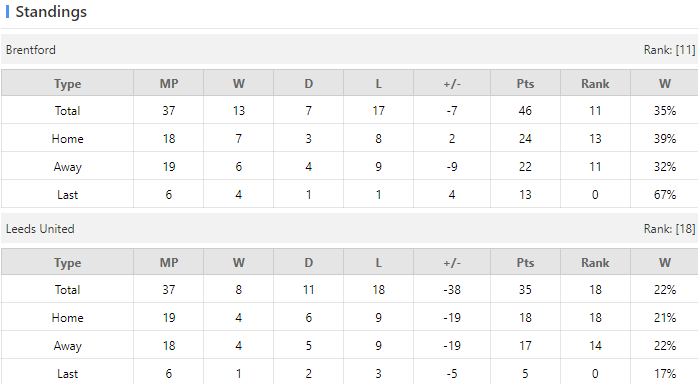 Leeds United
They are still in a poor state, taking only two points in five rounds. In the last game, they tie with the seagull 1-1. Now they rank eighteenth at the table of the League, competing with Burnley for the final place to avoid relegation.

Verdict:
Leeds have not been defeated by the bees in past 3 h2h clashes, which makes them have a psychological advantage. Besides, they struggle for relegation now. It is predicted that Leeds will take one point from Brentford at least in the coming game.

Football English Premier League Leeds United Brentford
(Disclaimer：Any views or opinions presented are solely those of the author and do not necessarily represent those of NowGoal. We disclaim any responsibility and accepts no liability for any direct or indirect loss or damage arising from any inaccuracies.)

Lnn 273 Article
Hi. I am Lnn. My passion for football started when I watched a football game by chance. That made me a fan of The Red Devil. I am happy to write the things what I am interested in.
See More Article