The match between Inter Milan vs Sampdoria for the Italy Serie A competition is scheduled to be played on 22 May, 2022. The match kicks off at 17:00 UK time. It will take place at the Stadio Giuseppe Meazza, in Milano.

Inter have won each of their last four matches, including an extra-time victory over Juventus, all of which have seen goals at both ends. With Inter widely expected to pile the pressure on their rivals by cruising to a win over Samp, value is scare for backers of Inzaghi’s men. Reigning champions Inter Milan could be 90 minutes away from retaining their Serie A title on Sunday, if they can claim victory against Sampdoria and Milan loading the game. 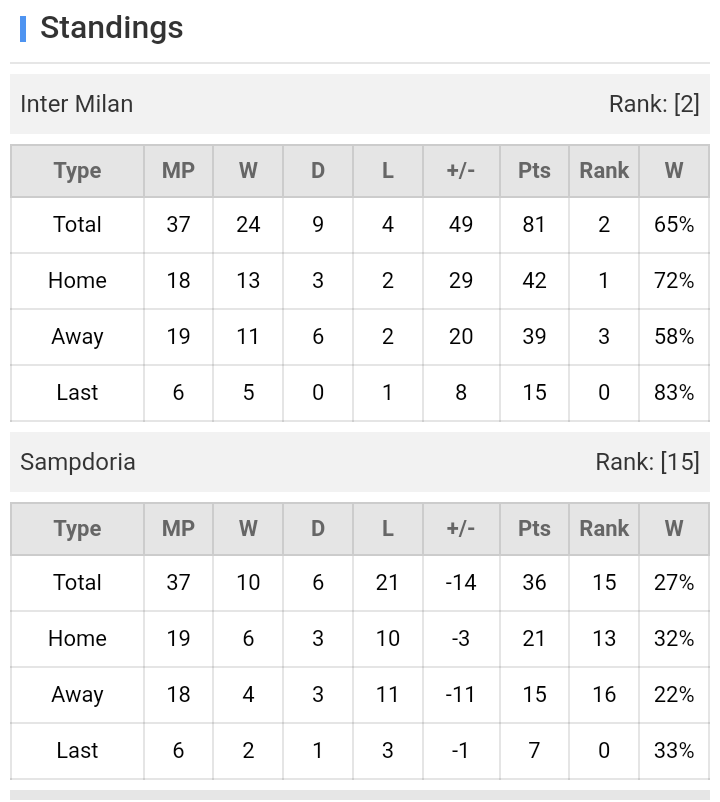 Sampdoria has won 3 games, they have 1 game that the final result was a draw, and they have lost 6 games in the last 10 games Edging over the line to Serie A safety, Sampdoria have collected seven points from their last four league games - one more than they posted in the previous nine - and are now the same number clear of the drop zone following a surprise result earlier this week.

Sampdoria have not registered a win against Inter Milan when they have played them away from home in the previous 4 league matches. In this game, Inter Milan are likely to be able to create a high number of chances and successful shots on target.

Football Italian Serie A Sampdoria Inter Milan
(Disclaimer：Any views or opinions presented are solely those of the author and do not necessarily represent those of NowGoal. We disclaim any responsibility and accepts no liability for any direct or indirect loss or damage arising from any inaccuracies.)

Obinna1010 151 Article
I am a footballer, awaiting for signing. I love football and analyzing is the best way I can do more to
See More Article