On Sunday, Brighton will face West Ham United at AMEX Stadium in a Premier League match.

Brighton Hove Albion
Brighton will participate in this match after a 1-1 draw with Leeds United last time out. Brighton have got eight points from their past four games, including wins over Arsenal, Tottenham and Manchester United. They've scored 11 times in their previous half-dozen games. In the same games, though, they have had 6 goals scored against them.

West Ham United
West Ham previously drew 2-2 with Manchester City. The team might still finish in the Europa League at the end of the season if they win here and Manchester United lose at Crystal Palace. West Ham have been scored against in five of their previous six games, allowing opponents to score eight goals in total. 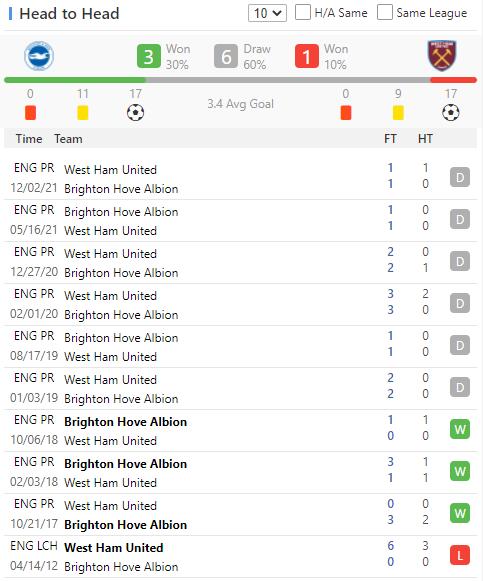 Prediction
Brighton have scored 10 goals in their last four games and will want to finish on a high note at home, while West Ham's Europa League hopes will be dashed if they don't get three points. With that in mind, both teams will most likely play expansive games.

Football English Premier League West Ham United Brighton Hove Albion
(Disclaimer：Any views or opinions presented are solely those of the author and do not necessarily represent those of NowGoal. We disclaim any responsibility and accepts no liability for any direct or indirect loss or damage arising from any inaccuracies.)

David Garcia 311 Article
My name is Dave, a European soccer enthusiast, I believe all leagues have their own charms. This is the reason why I have been watching and studying those less popular leagues for 20 years.
See More Article