Genoa will welcome mid-table Bologna to Stadio Luigi Ferraris in the final fixture of Serie A.

Genoa
After suffering a 3-0 defeat to Napoli in the last round, Genoa has already announced that they have been relegated. Although they are still only 3 points behind 17th-placed Salernitana, because of a negative head-to-head record between the teams this term, Genoa will therefore be demoted following Saturday's match. 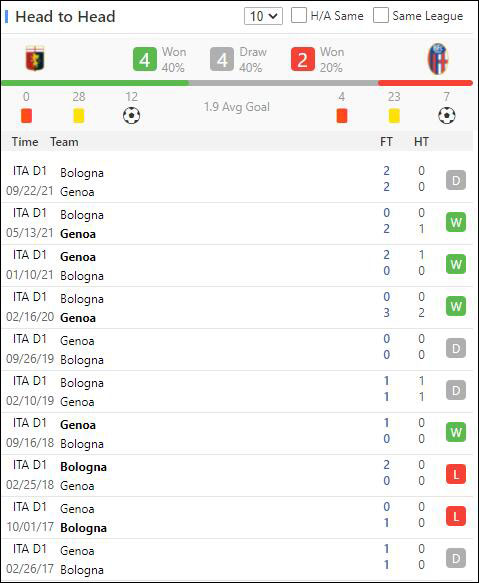 Bologna
Bologna lost to Sassuolo with 1:3 in last home game, which makes them fail to enter into the top half of the final Serie A standings. Bologna are in poor defenses, but their offensive sides could perform well. They once run in good attack to get points from Inter, AC Milan, AS Roma and Juventus.

Prediction:
Bologna have only picked up just three wins and averaged less than a point per game on the road, so I prefer Genoa would win the Handicap.

Football Italian Serie A Bologna Genoa
(Disclaimer：Any views or opinions presented are solely those of the author and do not necessarily represent those of NowGoal. We disclaim any responsibility and accepts no liability for any direct or indirect loss or damage arising from any inaccuracies.)

David Garcia 292 Article
My name is Dave, a European soccer enthusiast, I believe all leagues have their own charms. This is the reason why I have been watching and studying those less popular leagues for 20 years.
See More Article