The match between PSG vs Metz for the France Ligue 1 competition is scheduled to be played on 21 May, 2022. The match kicks off at 20:00 UK time. It will take place at the Parc des Princes, in Paris.

PSG has won 6 games, they have 3 games that the final result was a draw, and they have lost 1 game in the last 10 games. Avoiding a third straight game without a win at home is non-negotiable for PSG, who have been held by Lens and Troyes in their last two at the Parc des Princes, but they will certainly expect to end the campaign as the only Ligue 1 side to remain unbeaten on their own turf. 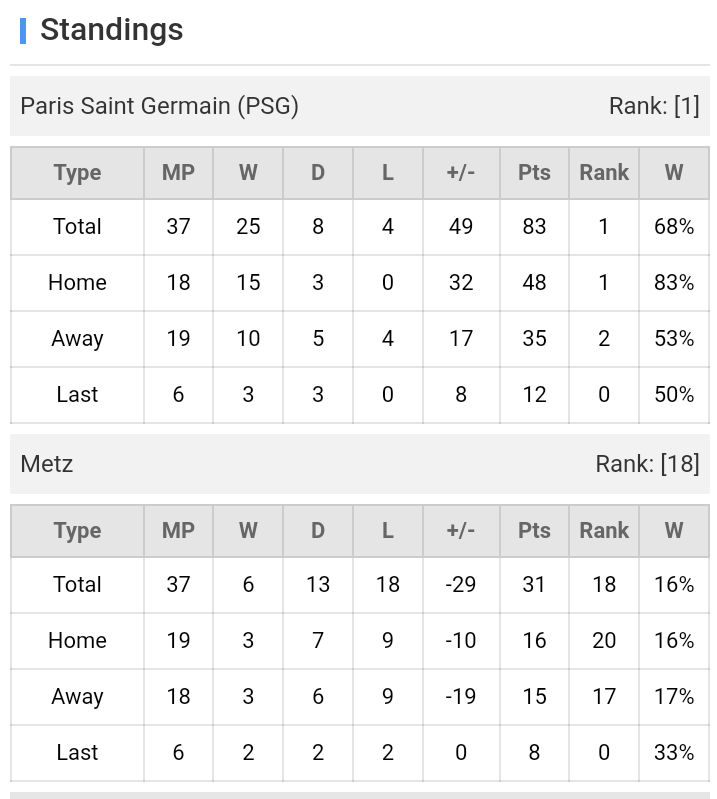 Metz has won 2 games, they have 3 games that the final result was a draw, and they have lost 5 games in the last 10 games. Metz are Currently sitting 18th in the table - which would see them enter the relegation/promotion playoff with either Auxerre or Sochaux - Metz are level on points with Saint-Etienne and three better off than basement side Bordeaux, who have a significantly worse goal difference.

PSG have scored and conceded in five of their last six Ligue 1 home games, four of which they won. Metz could grab a goal in the capital. PSG had dominated from their h2h wining 16 loosing 2 and draw 2.

Football France Ligue 1 Metz Paris Saint Germain (PSG)
(Disclaimer：Any views or opinions presented are solely those of the author and do not necessarily represent those of NowGoal. We disclaim any responsibility and accepts no liability for any direct or indirect loss or damage arising from any inaccuracies.)

Obinna1010 153 Article
I am a footballer, awaiting for signing. I love football and analyzing is the best way I can do more to
See More Article