Eupen will take to the pitch with visiting club Standard Liège at Kehrwegstadion in the First Division A clash on Wednesday.

KAS Eupen
Eupen enter this game following a 1-1 First Division A draw vs KV Kortrijk. It’s not been often in recent games where Eupen haven’t conceded. The reality is that Eupen have seen their defence breached in 6 of their previous 6 clashes, giving up 14 goals along the way. 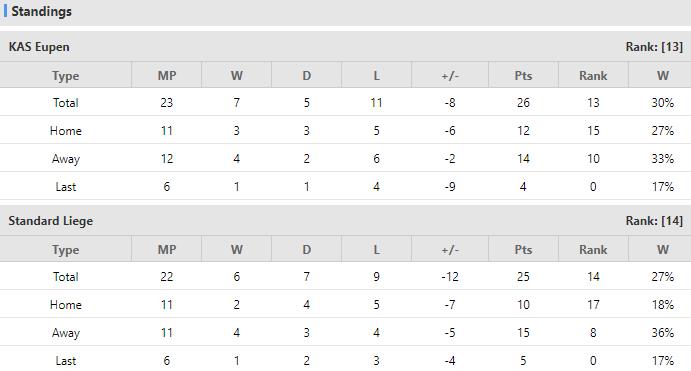 Standard Liege
In the game prior to this, Standard Liège drew 2-2 in the First Division A match with Club Brugge. Standard Liège have been dangerous up front leading up to this encounter, scoring 8 goals in their previous 6 matches. While their manager Luka Elsner will no doubt take that as a positive sign, Standard Liège have been somewhat leaky at the back, having also been scored against in 6 of those same matches. In any event, we’ll just have to find out whether the trend might be sustained in this next match or not.

Verdict:
In our view, Standard Liège and Eupen could end up without much reward for their efforts here. Little in this one, and it’s almost too close to call. Therefore, we predict a 0-0 draw by the conclusion of this game.

Football Belgian Pro League Standard Liege KAS Eupen
(Disclaimer：Any views or opinions presented are solely those of the author and do not necessarily represent those of NowGoal. We disclaim any responsibility and accepts no liability for any direct or indirect loss or damage arising from any inaccuracies.)